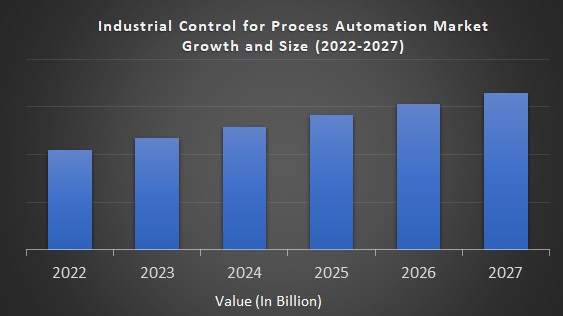 The advent of technology in the past few years has enabled the coupling of mechanical devices with computer-based systems, allowing the latter to work and control production. This has resulted in the development of automated equipment, capable of generating significantly higher production rates, effortless monitoring, and reduced wastage over traditional machines.

The Internet of Things (IoT) and Industrial 4.0 are dominating trends within the industrial sector, with machinery and devices being connected via the web. The amount of IoT-connected devices rose to 20.35 billion in 2017 from 15.41 billion in 2015 and is predicted to succeed in 51.11 billion by 2023, given the massive push from the investment of the technology providers through continuous research and development. To work these increasing numbers of connected devices and machine-to-machine connections within the manufacturing industry, the necessity for control and supervision is predicted to become more prominent, which will promote the rise of network-connected and controlled devices and systems.

The primary factor driving the expansion of the global industrial control for process automation market is the increasing utilization of enabling technologies in manufacturing, rising adoption of commercial robots within the manufacturing sector driven by collaborative robots, connected enterprise alongside production to cater to increasing population, and government initiatives toward the adoption of industrial automation in various enterprises.

The rising cost of labor, including the immense pressure on manufacturers to satisfy deadlines, has resulted in the increased adoption of automation in factories. Additionally, factors like improved efficiency and reduction in production costs, compared to the traditional manufacturing process, are boosting the adoption of automation, which is acting as a driver for industrial control for the process automation market.

However, the operations of DCS, PLC, SCADA, and MES are complex and need a highly-skilled workforce. Furthermore, initial investment related to a traverse from an assembly line through an automated production line is predicted to be high. Alongside it, the value involved in training the workers with the usage of the new sophisticated equipment is additionally added, which might be unaffordable for small- and medium-sized end users. These factors are hindering the market expansion to some extent.

Of these, the SCADA and ERP segments are predicted to expand with a considerable growth rate in the coming years, attributing to their increased adoption in end-user verticals.

The numerous processes within the paper and pulp industry require the raw materials to undergo tons of process with close monitoring of temperature and chemical content and therefore the process automation allows to realize an equivalent from one location through the method automation. The paper and related products have seen a rise within the past five years. Therefore, the demand is predicted to point out similar trends with the increase in demand from Asian, North American, and European regions over the forecast period. These regions are expected to further drive the market within the paper and pulp industry for increased process adoption.

Industrial control for process automation in developed regions like Europe and North America has reached saturation due to the first adoption of technological innovations. Hence, the foremost robust growth opportunity lies in emerging economies, like the Asian countries. Due to the increasing adoption of automation technologies and technological innovation in various industries, the Asia Pacific industrial control for the process automation market is predicted to carry the best market share within the global business in the coming years.

What can be the size of the global Industrial Control for Process Automation Market by 2027?

By 2027, it is predicted that the global Industrial Control for Process Automation market can reach a valuation of US$ 165.44 billion.

What can be the compound annual growth rate of the global Industrial Control for Process Automation market?

The Global Industrial Control for Process Automation market can expand with a CAGR of 9% during the forecast period.