The Global Building Automation Systems (BAS) Market size is likely to expand with a considerable growth rate in the coming years. The frequent security violations are a significant concern for the various government and personal establishments. The rising security concerns are fast changing the material of the worldwide building automation systems market. This is often a pertinent issue that is positively impacting the expansion of the global building automation systems market. Amongst all the market segments, the safety and access control presently holds a significant share of the worldwide market. The trendy installations are mostly equipped with smart fire, and social alarm systems and most of the government and personal buildings are installing new detection alarms and assess control systems to protect themselves from any unforeseen incidences. 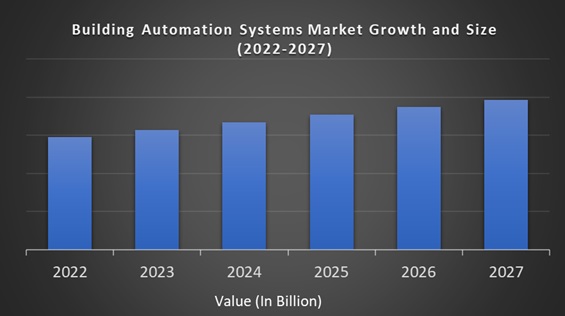 The highly digitized and compatible building automation systems are in high demand within the world market because those systems are backed by IoT, Bluetooth, and other mobile applications. Aside from private and commercial buildings, a number of the most natural luxury properties around the globe are putting security at the highest priority of their list. This changing scene will speed up the event of the worldwide building automation systems market.

The security and surveillance segment of the global market is likely to reap the utmost benefits from emerging security threats. The segment will produce a robust incremental opportunity of around US$ 28 Bn by the end of the foreseen period.

With the sheer proliferation of internet-connected things, starting from cars to fitness trackers, the Internet of Things (IoT) is now increasingly referred to as the Internet of Everything (IoE). 'Internet-connected' has emerged because of the new standard across building structures and therefore the installed devices, primarily pushed by a requirement for enhanced connectivity. With building managers and land investors having a vested interest in bringing down building operating costs and boosting related efficiencies, IoT sees a broader acceptance within the arena of AEC (architecture, engineering, and construction). This aspect acts as a primary driver for the expansion of the global building automation systems market.

BAS helps in saving energy and reducing operating and maintenance costs. However, end-users and building owners hesitate to implement BAS because of their false perception that these include the high cost of installation. Similarly, they're unaware of the fact that the value is primarily keen about the complexity of integration concerning a selected application. End-users demand affordable building automation systems but fail to understand the extent of the energy savings and therefore, the associated benefits of long-term cost savings.

On average, lighting accounts for about 25% of a building's energy usage. With lighting control systems, the lighting cost is often reduced by 30–60% while enhancing lighting quality and reducing environmental impact. Besides this, the initial investment in building automation and control systems are often quickly recovered during a few years because it helps to scale back energy costs, maintenance costs, and repair and replacement costs.

The wired segment accounts for a principal portion of the global building automation systems market, which is likely to be overtaken by the wireless segment in the coming decades.

The smart HVAC (heating, ventilation, and air conditioning) systems are critical with reference to the depleting natural resources, primarily fossil fuels, which are expected to boost the value of energy supply and distribution over the forecast period. With the increasing government regulations across developed and developing countries, most of the buildings need smarter heating and cooling in new buildings, which is aiding to the expansion of the HVAC systems. Smart HVAC upgrades can save substantial amounts of cash on utility bills, around 30-50%.

The commercial applications are estimated to expand with the highest CAGR in the coming years, attributing to the increased adoption in developed regions like North America and Europe.

North America building automation systems market dominated the global business in 2019. The US General Services Administration installed smart building technology in 50 of the federal government’s most energy-consuming buildings. Commercial buildings account for nearly 40% of US primary energy use. The rise in the adoption of HVAC systems in these buildings, to scale back carbon emission, is additionally favoring the market’s growth.

Europe building automation systems market is another promising region for the expansion of this business, owing to the favorable regulations and the presence of key market players.

Asia Pacific building automation systems market is predicted to be the fastest-growing business. The expansion is attributed to the large economic process witnessed by the emerging countries in this region. The rapid increase of the development industry, along with the government initiatives is predicted to drive the regional market growth.

What can be the size of the global Building Automation Systems Market by 2027?

By 2027, it is predicted that the global Building Automation Systems market can reach a valuation of US$ xx billion.

What can be the compound annual growth rate of the global Building Automation Systems market?

The Global Building Automation Systems market can expand with a CAGR of xx% during the forecast period.