The size of Global container Handling Equipment Market size was valued at 6 billion USD in 2021, and it is expected to grow at a CAGR of 4.7% during the forecasted period of 2022 to 2027. the valuation of the industry will be 8.7 billion USD. The growth is attributed to the constantly increasing containerized trade, coupled with the rising trend of port automation.

As indicated by the United Nations Conference on Trade and Development (UNCTAD), the volume of world sea exchange has arrived at 10 billion tons, which included dry load fares and imports, including mass merchandise and containerized exchange. The expanding holder exchange, combined with the expanding pattern of port computerization to satisfy developing needs, has prompted the proposition for mechanized container handling equipment, which is driving interest for container handling equipment around the world.

Also, to satisfy severe emanation guidelines, more vitality proficient equipment with low or zero outflows is requested, which would help the electric and hybrid market during the estimated time frame. 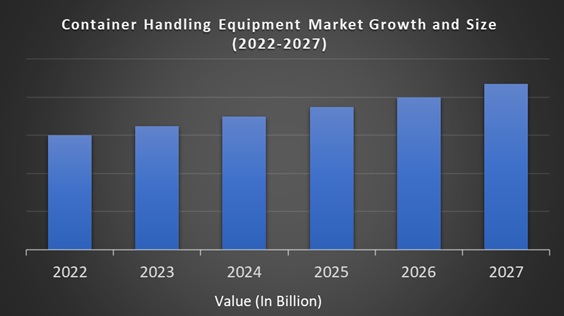 Several goods containers from different industries such as automotive, chemicals and materials, petrochemicals, and consumer goods, are transported every year in various regions including the Asia Pacific and the Middle East. Recently, the maximum transportation of containers has been noticed from Asian and Middle East countries.

According to the World Shipping Council, of the top 50 container port terminals in terms of handling million TEU in 2015, around 30 were in Asia and the Middle East. Such a high volume of demand and trade has ignited the demand in the global container handling equipment market.

Container handling equipment is high-powered equipment that ranges from 140 to 550 kW. These devices are used in harsh working conditions. They also require constant monitoring to achieve the desired productivity. In the monitoring of equipment performance, there has been a huge change with the adoption of different technologies.

By increasing the automation associated with this equipment, issues related to safety and security have been eradicated, which provided additional benefits such as real-time information of engine performance, fuel economy, tire pressure, HVAC, and maintenance and services.

However, these technologies have made the machines more convoluted. Also, continuous R&D efforts have resulted in products that are highly advanced and capable of handling multiple tasks.

All the steps involved in the designing, production, and distribution of this equipment require huge investments, which is, in turn, need to be brought even by raising the costs of the equipment.

Additionally, the rising focus on cabin comfort and the constantly changing emission norms require equipment manufacturers to enhance their products, which further increases the expenditure. Therefore, the higher cost of container handling equipment may be a hindering factor that will adversely affect the business growth.

The automatic Stacking segment accounted for the major share of the market in 2019. The growth in this segment is because of the increasing use of this type of tank as a result of the growing trade i.e., import and export of LNG across the globe and increase in the LNG bunkering facilities. These factors are the main reason to drive the demand for Container Handling Equipment during the forecast period.

Equipment such as RMG, ASC, and ship-to-shore cranes are offered in fully electric versions for container handling applications. RTG and straddle carriers are also available in an electric version along with diesel and hybrid variants. The stringent emission norms from various governments fuel the growth of this market. These rules and regulations for industrial equipment have witnessed non-stop upgrading at the regional level.

As per the European Union EU, the NOx (nitrogen oxide emissions) and Particulate Matter (PM) levels have been reduced by nearly 95% and 97%, respectively from Stage I to Stage V. Also, according to the US EPA norms, NOx, PM, and Carbon di-oxide levels have seen a steep decline from Tier 1 to Tier 4. Countries such as China, Japan, South Korea, and India are also expected to follow similar norms that are on a level with the EU and North American standards.

Currently, the Asia-Pacific market dominates the global container handling equipment market in terms of revenue due to the high volume of cargo transported from emerging economies such as China, India, and Japan.

The influence of globalization and westernization is also creating a positive impact on the market. The growing affluence of the people is creating demand for better quality goods that are more durable. The automotive sector of North America is also another segment where engineered plastics are heavily used. Various automotive and transportation industries are using engineered plastics for manufacturing the different components of the vehicles, which is likely to propel demand in the global container handling equipment business.

COVID-19 has transformed into a worldwide emergency, advancing at a rapid scale. No industry is insusceptible to this emergency and designing and development is no exemption. Building and development organizations must act presently to save the honesty of their tasks and ensure their kin.

The gauge for worldwide development in 2020 has been modified from 3.1 percent down to 0.5 percent. But the emergency may likewise speak to a remarkable chance - even a need to unravel a portion of the business' recorded difficulties and to plan for an increasingly advanced future. Coronavirus is putting weights of an alternate sort and extent on each piece of the designing and development esteem chain.

Some of the key companies profiled in the global container handling equipment market report are:

What can be the size of the global Container Handling Equipment market by 2027?

By 2027, it is predicted that the global Container Handling Equipment market can reach a valuation of US$ 8.7 billion.

What can be the compound annual growth rate of the global Container Handling Equipment market?

The global Container Handling Equipment market can expand with a CAGR of 4.7% during the forecast period.