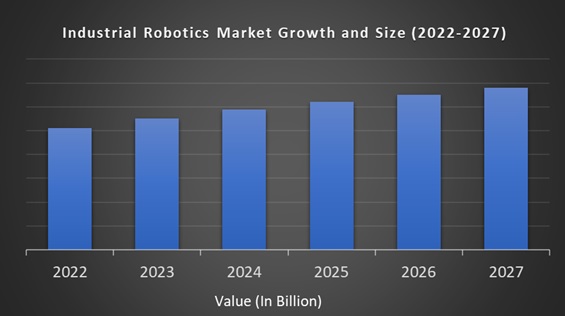 An industrial robot is mechanical equipment that is programmed to execute activities connected to industry production automatically. These robots can be reprogrammed, and the program may be altered as many times as needed, depending on the application. Industrial robots aid in improving productivity while lowering costs and generating high-quality goods in automation applications. Drive, end-effector, robotic manipulators, sensors, and controls make up the majority of industrial robots. The robotic controller is the robot's brain that assists in issuing commands. Microphones and cameras in robot sensors keep the robot aware of the industrial surroundings. The robotic manipulator is the robot's arm that assists it in moving and positioning, while the end effectors assist in interacting with the workpieces. Collaborative, cartesian, SCARA, cylindrical, and articulated robots are five types of robots used in industry. The degree of freedom of movement, size requirements, and payload capacity all influence the type of robot chosen. Industrial robots aid in the optimization of production processes for a healthy and efficient outcome. These features further increases the Industrial Robotics Market growth.

The increased use of automation in the automobile production process, as well as the integration of AI and digitalization, are driving up demand for industrial robots in the industry.

The primary driver fueling the global industrial robotics market is the government initiatives and public–private partnerships to lessen the impact of COVID-19. The Advanced Robotics for Manufacturing (ARM) Institute is a public-private collaboration that aims to boost American manufacturers' competitiveness by cooperating and creating new robotics solutions. It is funded by the US Department of Defense. The institution has requested speedy and high-impact robotics projects to provide the quick response required for the COVID-19 pandemic. The Indian government has granted a Rs 1.45 trillion incentive package by extending the production-linked incentive (PLI) plan to eleven industrial sectors, with a particular focus on the car and vehicle component industries. As part of its China exit program, the Japanese government has set aside USD 221 million in subsidies for Japanese enterprises to relocate to India and other locations. The French government has provided financial assistance to businesses by guaranteeing the repayment of certain qualifying loans up to USD 358 billion under its State Guarantee scheme. To combat the consequences of the COVID-19 outbreak, Indonesia launched two stimulus packages. The first package, worth $725 million, was announced in February 2020, while the second, at $8 billion, was announced in March 2020. The second stimulus package was introduced to safeguard the economy and small and medium-sized businesses (SMEs), notably in the manufacturing sector.

A robotic automation project can be challenging, particularly for companies that have never completed one before. Not only is a large financial investment necessary for the robot itself, but also for its integration, programming, and maintenance. A bespoke integration may be necessary for some circumstances, which will increase the total expenses. Due to a shortage of space and infrastructure, robot deployment may not always be practicable. Because SMEs are often involved in low-volume production, obtaining a return on investment (ROI) can be challenging.

The difficulty is demonstrated by the presence of enterprises with seasonal or variable production schedules. Fast-changing consumer tastes will necessitate regular robot retraining since items are changed on average once a year. Over-automation can sometimes be problematic. In compared to its Japanese competitors, the US automobile industry began with a higher level of mechanization. Cost overruns arose when product lines and consumer demand altered over time, and many robots became obsolete or obsolete. A company's operating costs may not always be reduced by replacing human personnel.

A collaborative robot system can range in price from $3,000 to $100,000. A commercial robotic system might cost anything from $15,000 to $150,000. Automation is an expensive investment for SMEs, especially when they are involved in low-volume manufacturing, due to the cost of industrial robots, integration fees, and peripherals such as end-effectors and vision systems. Therefore, these factors further decreases the global Industrial Robotics Market size.

The fastest-growing category is electrical and electronics, with growth expected to accelerate throughout the evaluation period in  the Industrial Robotics Market. Furthermore, the automobile sector has been vying to become the largest end-user of Industrial Robots. The hardware sector has embraced the use of mechanical robots since quality and accuracy are two of the most important aspects of an electronic production facility. The rising range of activities that robots can accomplish, notably in the assembly of electronic equipment and components, is one of the main reasons why electrical and electronic is the largest market for Industrial Robots.

Europe, North America, Asia Pacific, Latin America, the Middle East, and Africa are the five with a market share of 58 percent in 2019.

The Industrial Robotics market was dominated by Asia Pacific, followed by Europe and North America. Market development is likely to be fueled by high and early adoption of breakthrough technologies in countries like India and China. Because of its strong financial position, it can make major expenditures in cutting-edge equipment and technology to maintain smooth company operations. The Chinese government's "Made in China 2025" plan aims to increase the competitiveness of Chinese businesses through automation.

North America is anticipated to hold the steady CAGR in the global industrial robotics market during the forecast period because of the introduction of industry 4.0.

On the other hand, Europe tries to exhibit significant growth in the global industrial robotics market owing to the manufacturers, who are working on the collaborative robots.

Major Key Players in the Global Industrial Robotics Market are

What can be the total Industrial Robotics market value?

What is the major effecting factor in the Industrial Robotics market?

The increased use of automation in the automobile production process, as well as the integration of AI and digitalization, are driving up demand for industrial robots in the industry.

What is the market growth rate for Industrial Robotics?

From 2022 to 2027, the worldwide Industrial Robotics market is predicted to increase at a compounded yearly growth rate of 11.7%.