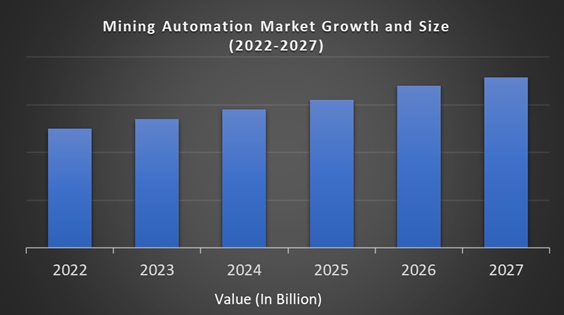 Mining automation is described as a technology that automates the mining process and reduces the need for human labor. The mining industry is in a period of transformation, and its culture is changing toward automation. The mining industry still requires a large amount of human capital, particularly in the developing countries and emerging markets where labor costs are low offers less incentive for increasing efficiency.

Mining automation has numerous advantages in terms of mine safety, increased productivity, and increased revenues across the business. The mining business has a bright future ahead of it, with rising demand and significant obstacles, because it has always been a labor-intensive business, the trend currently is to drastically expand automation.

Mining automation technology has exploded the consumer electronics sector as technology and computers have grown over time.

The usage of automated technology in the mining industry is fast increasing and changing the industry's landscape.

Working in an underground mine is exceedingly dangerous due to potential hazards such as negative health impacts, toxic gas exposure, and a lack of sufficient ventilation, among others. This concern has resulted in a demand for improved mining equipment for underground mining procedures to protect mine workers, which is propelling the market forward.

Market restraint is absent due to a lack of qualified and skilled labor. Mining automation necessitates the hiring of trained and highly skilled laborers on the mine site. The important backdrop is a dearth of required employees to operate the system. The lack of such a workforce is a major stumbling block to market expansion.

The internet of things (IoT) has provided miners with next-generation analytics that allow for real-time decision support. Various operators are cooperating with technology suppliers to implement wireless networks in underground mining, which is expected to present the market with numerous chances during the forecast period.

Over the projection period, natural resource depletion is likely to be a market issue. The majority of manual operations requiring entry level mining roles have been taken over by mining automation, resulting in the loss of work possibilities for unskilled employees, which inhibits market expansion.

The underground mining technique is anticipated to have the highest share in the market owing to the availability of the majority of minerals in the core of the earth. The work in underground mines is hazardous and needs proper protective norms for human intervention in the process. This is where the automation helps the minimizing of any casualties in the mining process.

Of the mentioned types the software segment is anticipated to have the highest growth in the forecast as mentioned earlier period. This is mainly due to the customized utilization of automated mining equipment. This is the reason different companies can customize their chain of processes and their plan of action.

Among the mentioned equipment the autonomous hauling process segment had the largest market share as of 2020. Hauling is an essential segment of the whole process of mining. So a non-stop hauling process is to be established, and this is possible with automation in the mining companies. The use of proper software and trustable hardware is the key to having such a non-stop working hauling process.

The Asia Pacific region leads the  Mining Automation market by both value and volume, as of 2020. This is attributed to the growing industries in fast-developing economies like India, China, and Japan.

The massive availability of unexploited natural resources which is in high demand in the market is the reason for this region’s uninterrupted growth in the future forecast period. Europe is second in the lead in the mining automation market in terms of both volume and value. The availability of a large customer base in this region is the major cause of its end-user eye-catching performance in the Mining Automation market.

North America follows Europe in the third position in the mining automation market, mainly due to the pre-existing significant industries in this region contributing to the region’s successful growth over the years. The Asia Pacific region is anticipated to have the highest growth rate in the forecast period. The Asia Pacific region is expected to attract major market giants towards expansion into the region. The regional advantages offered in this region, such as cheap labor and ease of resource availability, are the sole reason for this region’s advancement in the Mining Automation market.

On the other hand, the Middle East & Africa, and Latin America regions, being in the low developing countries due to the contribution of low GDP countries, have fewer chances for industry growth. Hence, the Metallized film Market in these regions is slow-growing in nature.

Major Key Players in the Global Mining Automation Market are

What can be the size of the global Mining Automation Market by 2027?

By 2027, it is predicted that the global Mining Automation market can reach a valuation of US$ 3.57 billion.

What can be the compound annual growth rate of the global Mining Automation market?

The global Mining Automation market can expand with a CAGR of 7.90% during the forecast period.