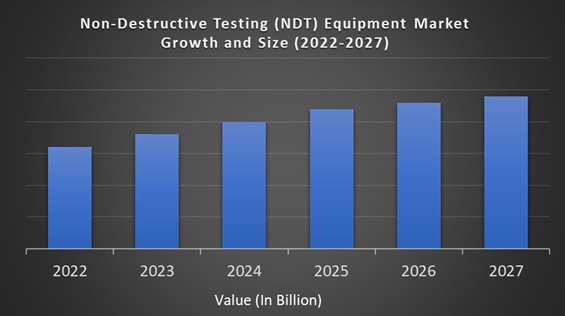 Due to defect identification at complicated locations and uneven surfaces, projects utilizing non-destructive testing procedures take less time to complete. The need for non-destructive testing is expected to increase in the next years as the risk of failure is reduced. Furthermore, when compared to other NDT equipment, the efficacy of defect detection and the ease of operation of ultrasonic equipment are two of the most important elements driving the rising usage of ultrasonic testing. Furthermore, improvements in ultrasonic technology are projected to increase the use of this diagnostic technique during the next six years due to its simplicity. These factors are further responsible for the global Non-Destructive Testing (NDT) Equipment Market growth.

Over the forecast period, the Non-Destructive Testing (NDT) Equipment Market share is predicted to expand significantly. This expansion might be linked to increased urbanization in developing countries like India and China, which necessitates large-scale building and industrial projects. Because of the pace of such projects, the executors must use testing techniques to guarantee that the work is of high quality. This tendency is projected to have a beneficial influence on Non-Destructive Testing (NDT) Equipment Market’s size in these countries, increasing the market's worldwide penetration.

Over the projected period, the non-destructive testing (NDT) market is expected to grow due to an increase in industrial activity in both emerging and developed countries.

Material, construction, and strength are all held to the highest standards in the aircraft industry. Non-destructive examination (NDE), non-destructive evaluation (NDE), and non-destructive inspection are various terms for the same method (NDI). Failures in strength, surface, and cracks can result in a variety of tragic accidents and deaths. NDT is a commonly used testing method for inspecting aircraft parts and components prior to assembly. Fatigue cracks in aircraft components are common and might form over a period of time. In order to detect indicators of damage, about 80% of inspections are carried out using the visual inspection testing technique in airplanes all over the world, which further increases the global non-destructive testing (NDT) equipment market growth during the forecast period. However, in the examination of an aircraft component, numerous testing methods and techniques are gaining momentum, including liquid penetration, acoustic emission testing, electromagnetic testing, ground penetration, radiography, magnetic particle, and eddy current testing. The future expansion of the non-destructive testing equipment industry will be aided by the availability of effective technologies for detecting cracks, faults, and leaks in aviation systems, components, and parts.

In the oil and gas, power, and automotive sectors, the NDT methodology includes research and development (R&D) approaches to training and service-based supply chains. This technology is used in the oil and gas sector to check the interior and exterior corrosion of oil and gas pipelines. Visual inspection, liquid penetrant examination, magnetic particle inspection, and ultrasonic inspection are among the procedures employed. The approach is used to examine pressure systems and steam and gas turbines in the power sector. This approach is used to check fuel rods, tiny valves, waste containers, and waste management equipment in nuclear power plants. As a result, the NDT market is growing due to increased demand for this approach in the gas and oil sector and the power industry.

Several customers throughout the world have complained about the testing and analysis method's shortcomings. Only high-value sophisticated instruments can be used for NDT. For maximum precision, analysis to discover fractures, faults, and leakages, as well as troubleshooting, requires modern gear and instruments. As a result, a scarcity of certified and competent workers to run testing devices is expected to limit the global Non- destructive equipment market growth. To handle instrumentation, a high degree of training and multiple certifications is required, resulting in significant prices for service providers functioning in the global non-destructive testing equipment market.

In 2022, the traditional test technique segment led the global non- destructive testing equipment market, accounting for 80.5 percent of total revenue. Traditional NDT procedures such as visual testing, magnetic particle testing, liquid penetrant testing, eddy current testing, ultrasonic testing, and radiographic testing are all seeing the increased application. In comparison to other traditional non-destructive testing procedures, ultrasonic detectors are expected to dominate the market. They are simple to operate, lightweight, and provide precise results. Ultrasonic testing is growing more popular as a result, and this trend is expected to continue in the coming years. The phased array ultrasonic testing (PAUT) segment led the market in 2022, accounting for 21.0 percent of the total. This increase can be attributed to the increasing use of PAUT in comparison to other digital NDT techniques. The PAUT method's detailed visualization feature assists in determining the defect's size, depth, shape, and orientation. PAUT is a type of ultrasonic testing that employs several transducers and sets of ultrasonic testing (UT) probes made up of a variety of smaller components.

North America emerged as the most dominant segment in 2022 in the global non-destructive testing equipment market, with a revenue share of more than 36.0 percent. This is owing to the extensive usage of nondestructive testing techniques in a range of applications, as well as the qualified workforce and a number of nondestructive testing training institutes in the region. In addition, power generated from shale oil in the United States and Canada is expected to accelerate the region's growth. Furthermore, an increased emphasis on the use of NDT to avoid unexpected system failures is predicted to fuel the regional market.

Over the projection period, the Asia Pacific market is estimated to grow at a CAGR of more than 9.0 percent. Manufacturing, construction, and electricity generation all grew in the region, adding to the region's growth. Despite the fact that the region now has a skilled labor shortage, this is projected to improve in the next years as more people become aware of and adopt non-destructive testing procedures.

Furthermore, the Middle East is seen as a potential market for NDT technologies because to the significant presence of the oil and gas sector.

What can be the total Non-Destructive Testing (NDT) Equipment market value?

Which non-destructive testing method was the most popular?

In 2021, the ultrasonic testing category dominated the NDT market, accounting for 24.8 percent of total revenue. The market is expected to grow at a CAGR of more than 7.7% during the projected period, making it the fastest-growing test technique category.

What is the major effecting factor in the Non-Destructive Testing (NDT) Equipment market?

Over the projected period, the non-destructive testing (NDT) market is expected to grow due to an increase in industrial activity in both emerging and developed countries.

What is the market's growth rate for Non-Destructive Testing (NDT) Equipment?

From 2022 to 2027, the worldwide Non-Destructive Testing (NDT) Equipment market is predicted to increase at a compounded yearly growth rate of 6.7%.