The Global Sand Control System Market size was valued at US$ 2.71 Billion in 2021, and it is expected to reach the worth of US$ 3.56 Billion by 2027, growing at a healthy CAGR of 3.71% during the forecast period of 2022-2027. The continuous development of the shales and efforts to keep up the reserve to production ratio from wells are the major factors driving the market for Sand Control Systems. 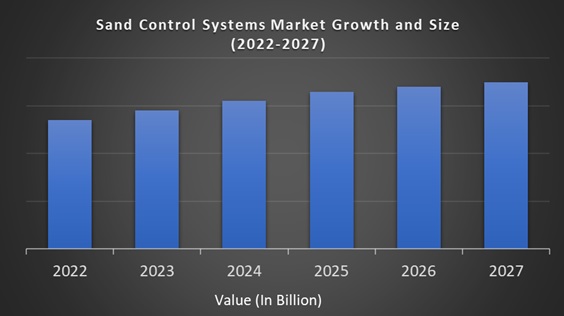 Nowadays, the greater part of the world's oil and gas wells delivered from unconsolidated sandstones produce sand with supply liquids. Issues related to sand production include incorporating stopping of perforation burrows, collection in surface separators, sanding up of the production span, and possible disappointment of downhole and surface equipment from erosion. There are a few strategies for limiting sand production from wells. The decisions range from basic changes in working practices to costly consummations, for example, sand combination or rock pressing. The sand control technique relies upon site-explicit conditions, working practices, and monetary considerations.

The rising interest for keeping up the reserve to production ratio from mature/existing wells is the major factor in driving the global sand control systems market growth during the forecast period. The reserve to production ratio shows the leftover life expectancy of a characteristic asset at a given production rate. With the plunge in unrefined petroleum costs, oilfield operators zero in on existing wells and work on the reserve to production ratio. With the decrease in oil reserves, significant oil and gas organizations have moved their consideration toward innovative progressions to create tools and strategies expected to get to leftover reserves on traditional wells. Oilfield operator companies are presently centered around expanding recuperation and broadening mature fields, henceforth surpassing regular production levels. The quantity of mature oilfields is very high and is expanding because of the rising oil and gas production, which brings about the quick consumption of new fields.

The expanding drilling of the oil and gas field in the inland areas has expanded the market request; subsequently, the rock pack systems have the biggest portion of the overall industry. The seaward fruitions are better than the coastal ones as they help understand the qualities of the intricate repository, improve the existence of apparatuses, and help explore the super profound levels. The developing boring action in the mid-sea likewise expands the interest in Sand Control Systems.

The major factor responsible for the global sand control systems market growth includes price fluctuations in crude oil harm drilling activity. However, the fluctuations in the crude oil price, significant expense, and specialized obstructions related to well intercession movement and tough government regulation exist in certain areas that influence the fracturing and drilling exercises are relied upon to be the significant restrictions for the sand control system market.

The cased hole sand control system method is most widely used because of its technical reasons, which relate to the stability of the hole. First, the production casing is set in the reservoir to complete the cased-hole and guarantees safe production activities. It additionally acts as a barrier and stops solids, unwanted liquids, and gases from entering the wellbore. Next, the casing and cement are punctured to permit the hydrocarbons to enter the well stream to produce. This cycle includes running a hole weapon and a reservoir finding gadget into the wellbore, ordinarily through a wireline, slackline, or looped tubing. When the reservoir level has been reached, the weapon then, at that point, shoots holes in the sides of the well to permit hydrocarbons to enter the good stream.

The gravel Pack segment contains the largest share of the Sand Control System Market; Gravel packing is a viable method for preventing sand from entering the production string. Gravel pack systems are utilized to build the surface region of the delivering great to expand the production rates. In gravel packing, a steel screen is put in the wellbore. The encompassing annulus is loaded with the pre-arranged gravel of a particular size intended to forestall the entry of formation sand.

The essential goal is to balance out the formation while making insignificant hindrances well efficiency. Gravel pack systems are reasonable for unconsolidated to tight sand formations, both open-hole or cased-hole wells, and for both customary and unpredictable applications.

Frac Pack is expected to have the next place in the share of Sand Control System; Frac packing is a complete procedure that consolidates two particular cycles water-powered fracturing and gravel packing. The fundamental test of a frac-pack completion is the effective making of high-conductivity breaks with the tip-screen out (TSO) method and the situation of proppant inside those cracks and in the annulus between the screen and wellbore divider. This is additionally compounded by doing so in an ultra-high-permeability environment, where high liquid leak-off rates are evident.

Onshore applications have the maximum share in the Sand Control System Market, tremendous onshore oil and gas wells. It expanded to rely on regular oil and gas, the most productive and helpful method for satisfying the energy need. Gravel packs are essentially introduced for onshore areas. Onshore areas include putting these systems in the wellbore to filter sand during extraction. The developing interest in onshore applications shows expanding oil production from bowls like Permian.

Offshore is expected to record a decent share during the forecast period; in numerous offshore districts, the geologic formations that produce oil and gas are unconsolidated, implying that the sand that makes up these formations is free or inadequately reinforced, similar as the sand on an ocean side. Thus, this free sand can wind up inside the production funneling in the well or production hardware on a superficial level. ​Sand production is profoundly unwanted since it can plug lines and gear, disintegrate funneling (similar to sandblasting), and lead to erosion of line and hardware. Disposing of sand production has been one of the fundamental production challenges engineers have faced since the beginning of offshore oil and gas development.​

Asia-Pacific is expected to have the largest market size in the forecast time frame; The area represents a significant part of the global oil interest because of the rise in industrialization, urbanization, populace development, and the development of the consumer class. This development in oil request moves oil and gas investigation and production exercises, which drives the market for oilfield hardware and administrations, including sand control arrangements.

Middle-East and Africa are going to be fast growing in the market. Saudi Arabia has oil and gas caught in sandstone with interesting qualities, which display low-to-direct porousness; however, a high sanding inclination is brought about by unconsolidated stone under high tension and temperature. Attributable to its enormous oil and gas production base with high sanding inclination, the nation is probably the biggest market for sand control systems in the world.

The spread of the COVID-19 pandemic has contrarily affected the global sand control systems market attributable to the lockdowns forced in most of the nations across the globe since December 2019. Sand control systems are a necessary piece of oil and gas production systems. They assist with eliminating sand production in the wellbore. A sand control framework assumes a significant part in the consummation interaction and upgrades the exhibition and the efficiency of the well. These days, most of the oil and gas wells made from unconsolidated sandstones produce sand with reservoir fluids. Challenges connected with sand production include stopping hole burrows, gathering surface separators, sanding up production stretches, and the possible disappointment of downhole and surface gear because of erosion. Such issues can present security concerns and financial dangers. The interest in these items has been hindered because of the transitory closing down of organizations lately. Notwithstanding, a few nations have begun lifting the lockdowns to re-establish their financial conditions, which is expected to support the item interest before long.

What can be the size of the global Sand Control Systems Market by 2027?

By 2027, it is predicted that the global Sand Control Systems market can reach a valuation of US$ 3.56 billion.

What can be the compound annual growth rate of the global Sand Control Systems market?

The Global Sand Control Systems market can expand with a CAGR of 3.71% during the forecast period.