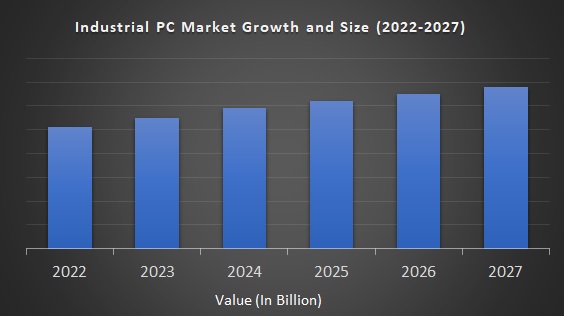 The demand for powerful PCs that can work in severe environments, high dependability and long-term performance of industrial PCs, and the growing use of IoT in manufacturing industries have been driving the worldwide industrial PC market. However, hefty initial installation costs and rising security vulnerabilities may stymie global expansion. The Global Industrial PC Market research offers a comprehensive analysis of the industry.

Industrial PC Market Trends consists of multiple technological advancements, such as the integration of the Internet of Things and artificial intelligence with these PCs that aid the detection of defects are working as other growth-inducing variables in the product manufacturing system. Market development is further aided by the growing use of solid-state drives in industrial PCs. While operating and optimizing digitalized production, silicon microchip-based SDDs enable high-speed data transfer while generating minimal heat.

Due to the rising in adoption of automation and Internet of Things (IoT) technologies in sectors, the industrial PC industry has seen tremendous development. Industrial PCs assist in providing a platform for running automation software for real-time monitoring and control of processes. Many businesses and startups are working on IoT technology adoption. For instance, in June 2019, Indian IoT startup Switch On had raised $1 million seed funding from Pi Ventures. In April 2019, Altizon Systems Pvt. Ltd had raised $7 million in a succession of funding rounds.

TVS Motor Company Ltd. provided finance. Manufacturing firms are concentrating their efforts on boosting their production capacity in order to lower costs and increase their competitive position by improving production efficiency through the use of industrial automation.

PC, thereby driving the market. It is vital to maximize resources and decrease waste in businesses such as metals and mining, oil and gas, and others whose profit margins are comparatively smaller than in industries such as automotive and food and drinks, among others. This is a problem in the manufacturing process that results in significant losses, forcing producers to replace the defective product with a new one. As a result, manufacturing businesses are increasingly focusing on the use of industrial PCs to automate their manufacturing processes and boost efficiency. These PCs also help businesses improve accuracy and reduce operating expenses, resulting in higher quality, uniformity, and safety. As a result, the market for industrial PCs is expected to grow in response to rising demand for energy-efficient manufacturing operations.

Industrial PCs are used in factories as part of the automation process. Adoption of automation machines can be one of the most cost intensive processes for an industry. It involves millions of dollars. In addition to the upfront expenditures, there are a number of unforeseeable charges that may outweigh the actual cost savings from implementing automation in the organization. Some of these expenses include research and development costs for automating a process, as well as preventative maintenance and repairs. Furthermore, the cost of training associated with the use of industrial PCs limits market growth. The majority of industrial PCs also take up more space, which is a huge issue for small businesses.

Din rail PCs are widely used in connected factories for efficient manufacturing processes, contributing to the industry's rapid expansion. Furthermore, due to their high temperature threshold, these PCs are highly durable and can be used in severe situations, resulting in decreased downtime and higher productivity. Industrial PCs are simple to set up and have a small footprint. They can tolerate extreme temperatures and absorb stationary shocks or falls. As a result of these advantages, the adoption of industrial PCs has increased, resulting in market growth.

Industrial PC makers benefit from direct sales channels in a variety of ways. Manufacturers may satisfy their application-specific requirements, eliminate the retail markup, and reduce inventory carrying costs and hazards by selling industrial PCs directly to end-user businesses. As a result, the direct sales channel market is expected to increase at a faster rate over the forecast period.

By End use industries:

Automotive manufacturing, aerospace and defense, semiconductor and electronics are expected to develop faster than the rest of the economy throughout the projection period. The introduction of automation in these areas is largely responsible for this. Growing funding initiatives for IoT technology are expected to boost industrial PC use, resulting in market development. Because of the widespread use of industrial-grade computing systems in the manufacturing process, automotive has a much higher global industrial PC market share. Furthermore, increasing innovations in the expansion of these facilities are contributing to the market's growth pace. Morris Garages, a British vehicle manufacturer, announced plans to invest $ 429.25 million in December 2019.

APAC is the dominant region in 2020 with a market owing to the high production base in the region, followed by North America and Europe. The presence of huge production bases in China and India is largely responsible for the large market share. The China Association of Automobile Manufacturers said in March 2020 that vehicle production and sales were 3.47 million and 3.67 million units, respectively. During the foreseeable period, the adoption of robots aids companies in decreasing labor costs by giving opportunities for industrial PCs. Furthermore, many manufacturing organizations in the United States have begun to use robots to increase productivity and efficiency. Robotics monitoring necessitates high-quality industrial PCs, which are expected to fuel market expansion.

Major Key Players in the Global Industrial PC Market are

What are the benefits and drawbacks of new entrants to the market?

There are moderate opportunities in the industrial PC market for start-up companies these businesses can supply industrial PCs to the fast-growing energy, automotive, and oil and gas industries. The presence of established businesses with diverse product portfolios catering to many industries, on the other hand, enhances market competition.

Which is the potential market for industrial PC in terms of the region?

The APAC region is expected to grow significantly due to the growing manufacturing activities of various industries, including semiconductor, consumer electronics, and automotive.

What are the market's main drivers and prospects for industrial PCs?

Who are the major consumers of industrial PC that are expected to drive the growth of the market in the next 5 years?

The major consumers for pharmaceuticals, automotive, aerospace & defense, food & beverages, and medical devices industries are expected to have a significant share in this market.

Which are the major companies in the industrial PC market?