The global Release Agents Market size was worth USD 888.9 million in 2021, and it is estimated to reach a valuation of USD 1.1 billion by the end of 2027, expanding at a CAGR of 4.1% during the forecast period. The demand for these agents depends on the quality and functionality of product performance. 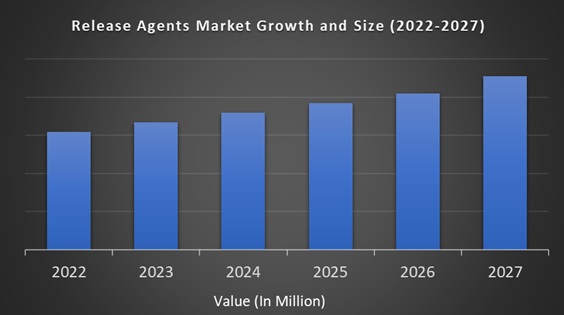 Release agents are essentially used for foods that tend to be sticky and moist. Release agents prevent food from adhering to equipment, machinery, packaging materials, and molds. The mold release industry has progressed favorably in recent years due to the transition from vegetable oils and basic emulsifiers to more efficient and effective products. The main function of the releasing agent is to remove food products from trays, molds, pans and cans during the baking process.

In particular, the need for these release agents is increasing in the bakery and confectionery industry is supposed to accelerate its adoption in the coming years.

As health awareness and lifestyle changes in emerging markets in China and India, demand for bakery foods such as bread, cakes, pastries and cookies are expected to accelerate the growth of the global release agents market during the outlook period. The main strength in the integration of the release agent is to prevent foreign substances from binding to the main product. The release agent is applied in the concrete construction sector because it prevents fresh concrete from adhering to the forming surface in plywood, plywood, aluminum, or steel. These agents are often available in the form of barriers and reactive agents. Barrier agents such as diesel, paraffin wax, heating oil, and motor oil have the capacity to avoid different particles from sticking, forming a barrier or physical film between the surface and the concrete. The increased availability of the aforementioned blockers in terms of availability and cost is expected to have a favorable effect on the release agent market. As the depletion of crude oil and natural gas increases, chemical manufacturers have focused on providing water-based products that can have a positive impact on the release agent market. Mold release agents find usage in the food and beverage industry to separate food from containers after a process such as roasting or baking. The increasing importance of processed foods, such as bakery products, is one of the main growth factors in the mold release market.

Geographically, the global market for release agents has been classified in North America, Europe, Asia Pacific, the Middle East, Africa and Latin America. The mold release agent market in developed countries like the United States and Europe is saturated due to a high penetration rate and a high penetration rate. Europe dominated the global mold release market and is envisioned to rule the worldwide market during the prediction period. The Asia Pacific region is anticipated to be the fastest-growing market as applications grow in the bakery and confectionery industries in nations like China and India. In the emerging economies of China, India, and Malaysia, lifestyle changes and increased health awareness are determining factors in increasing the consumption of baked goods and can therefore drive demand from the launch market. Solid rubber manufacturing bases in Thailand, Indonesia, Malaysia and Vietnam are foreseen to increase the growth of the release agent market during the projection period. Solid paper and pulp production bases in Brazil, Mexico and Indonesia are assumed to force launch market participants to place their production sites nearby.

Major key players in the Global Release Agents Market are