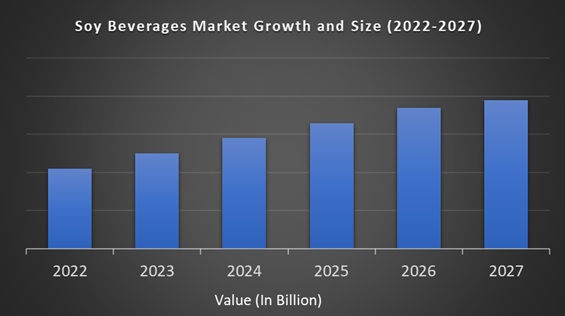 Soy Beverages, like soy milk, contain protein like milk. However, they have fewer calories than whole milk. Additionally, soy-based products are an important source of nutrition for millions of animals. Also, the adoption of soy beverages is high among people with dietary or allergic problems, leading the soy beverage market. Due to this, these products are gaining popularity among health-conscious consumers. Soy-based products are considered nutrient-rich and cholesterol-free, especially carbohydrates, protein, and omega-3 fatty acids. Soy protein is not a complete source of protein and contains other important nutrients such as B vitamins, fiber and omega 3 fatty acids. All these nutrients play an important role in the growth of the baby, the growth of the fetus in pregnant women and provide a wide range of benefits for both children and adults.

Population growth, health-conscious lifestyles, and people's increased disposable income are also some of the main factors driving the growth of the global soy beverages market.

Consumption of soy beverages is exceptionally high in developed countries. However, due to low consumer awareness, demand for products in underdeveloped and emerging countries remains low. Soy drinks are consumed due to the increased availability of soy and scientific facts that demonstrate many of the health benefits of soy. These include lowering blood cholesterol and lowering the risk of certain types of cancer. All these nutrients play an important role in the growth of the baby, the growth of the fetus in pregnant women and provide a wide range of benefits for both children and adults. Also, soy drinks are consumed to replace unhealthy drinks due to their nutritional content. This is expected to significantly lead the soymilk beverage market during the forecast period. Also, as demand for soy beverages increases, producers are focusing on bringing innovation to their products to increase market share. Identity Preservation (IP) soy is increasingly used in the processed soy milk and tofu industries located in this area to ensure consistency, quality, and high standards of the end product. Similarly, many soy manufacturing companies use techniques such as "taste control" to improve the taste of soy milk. This is expected to significantly lead the soy beverage market in the region. It is a healthy alternative to meat and other animal products, making it a good source of protein for vegetarians. The global soy beverage market is growing as health awareness augments in developing and developed countries.

The harmful effects of soy and soy derivatives has hampered this market growth. Studies have shown that the presence of some ingredients in soy drinks causes serious concerns, hindering the market growth. Foods rich in homemade protein are chosen more than processed soy products. Adoption of soy milk is expected to be quite high as the health benefits are expected to affect the growth of the soy beverage market.

The global soy beverage market is classified by product, type and distribution channel.

By product, the market is divided into soymilk and yogurt. Soy milk is increasing in popularity significantly because it is cholesterol-free and contains less saturated fat than health-promoting cows. The soymilk sector is expected to occupy a significant market share as the adoption of alternative animal milk drinks increases worldwide. Furthermore, increased adoption of soy milk by the vegan population is expected to drive growth in the soymilk segment during the forecast period. In addition, it will lead the soymilk segment in the soy beverages market by making soy milk readily available in a variety of flavors such as fresh chocolate, vanilla, and more options.

Depending on the type, the market is divided into unflavored soy beverage and flavored soy beverage. The unflavored segment stood out in 2018, and the trend is expected to continue in the coming years. Unflavored soymilk drinks are preferred by many consumers as they are neither fortified nor artificially sweet. Many manufacturers require products fortified with calcium and other essential nutrients.

According to distribution channels, the soy beverage market is subdivided into retail stores, supermarket/hypermarket, and online channels. Of these, the online channels are estimated to develop with a considerable CAGR in the coming years.

The global soy beverages market is segmented by region in Asia Pacific, Europe, North America, and others. North America is expected to contribute significantly to market growth during the forecast period. In addition, the changing lifestyle and aging population will also lead the soy beverage market in the region. Market growth in this region is increasing due to high disposable income and high demand for processed foods. Along with North America, Europe is also expected to be an important region for the growth of the soy beverage market. Market growth is increasing as the population grows due to the lactose intolerance that adopts alternative beverages such as soy drinks. The Asia Pacific region is expected to represent a significant portion of the soy beverage market during the forecast period. Also, the adoption of soy beverages in the region is increasing as the prevalence of obesity and related disorders increases in countries such as China and India. Growth in the region is due to increased government support for the production of soy-based products throughout the region. Also, as the millennium generation increases, the soy beverage drink market is growing due to the willingness to buy health products and health propensity.

Major key Players in the Global Soy Beverages Market are

What is the market growth rate for soy beverages?

Over the next five years, the market for soy beverages is expected to rise at a CAGR of 6%.

Which region is likely to dominate the soy beverage market?

During the forecast period of 2023 to 2028, demand for soy beverages in Europe is expected to boost the total market.

What are the major reasons driving the global soy beverage market?

The global soy beverage market has grown rapidly, mainly to rising demand for lactose-free food products, which are easier to digest. Furthermore, manufacturers have introduced different flavours such as vanilla, chocolate, and strawberry to hide the nutty taste of soy milk, which is fuelling product demand among children.

What segments does the Soy Beverage Market cover?

Product, type, distribution channel, and geography are all used to segment the global soy beverage market.

What are the restraints in the Soy Beverage Market?

During the projected period, the availability of substitutes such as almond milk, coconut milk, and others, as well as the inclusion of diverse flavours to mask the nutty taste of soy milk, would act as a market restraint.