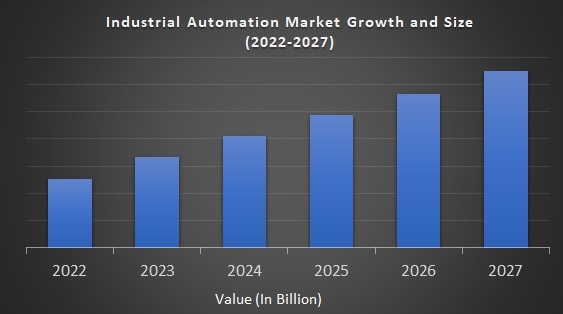 Automation is the use of data technology and control systems (computers and sets of devices) to exchange human operators to regulate industrial machinery, processes, and the building environment. Computer-controlled robots, which have the power to finish an equivalent process at a compatible top quality and controllable speeds, are utilized in many points of commercial production. The growing need for automated systems has increasingly shifted focus to optimization within the areas of security measures, efficiency, and low power consumption.

Increasing labor wages across industries and rising demand for practical solutions that will manage failure at the component level can drive the market. With an increasing requirement for industrial-grade products occurring in almost every sector, a high need for automation which will help mass-produce commodities is being felt everywhere in the world. This has caused a spike in the number of players entering the industrial automation market, which is undoubtedly expected to extend the competitive intensity during the coming years.

A sudden increase in fast production capacities in various industry verticals is primarily driving the growth in the global industrial automation market. There is a massive demand for such systems in terms of automotive assemblies, telecom networks, aircraft, heat treating boilers and ovens, factory machinery, steering, and ship stabilization, and other mechanical systems. Moreover, several companies are pouring vast sums of cash to facilitate research and developmental processes regarding industrial automation. Various industrial segments are implementing automation systems to scale back labor burden, consequently making the market grow at a good pace. Automation can also speed up the implementation of several innovative solutions, compared to manual processes.

Steep costs required to line up systems for machinery production, as expensive research and development activities are undertaken for an equivalent is significantly hampering the worldwide industrial automation market's growth. High installation and maintenance costs are, to some extent, are discouraging small-scale plants and industries from avoiding automation altogether. However, the lack of awareness about the benefits of automation in several regions too is posing a threat to the market in a few emerging economies.

SCADA and DCS are the most prominent sectors across the global industrial automation market. The process industry holds a leading share within the market thanks to the high adoption of commercial control and factory automation to optimize the assembly process. Additionally, growing demand for real-time visibility and sophisticated operations in power, oil and gas, food and beverages, and mining industries is anticipated to spice up the need for industrial control and factory automation. Implementation of an automated process is complex in process industries than in the discrete sector. Thus, the deployment of control technologies, like a distributed system (DCS), is high within the process industry.

The automotive and transportation segment is likely to expand with a noteworthy growth rate in the global industrial automation market in the next five years.

Major Key Players in the Global Industrial Automation Market are

What can be the size of the global Industrial Automation Market by 2027?

By 2027, it is predicted that the global Industrial Automation market can reach a valuation of US$ xx billion.

What can be the compound annual growth rate of the global Industrial Automation market?

The Global Industrial Automation market can expand with a CAGR of 7.56% during the forecast period.