The Global Spirulina Extract Market size was around USD XX billion in 2022. It is expected to grow at a CAGR of 7.1% to reach USD XX billion by 2028. 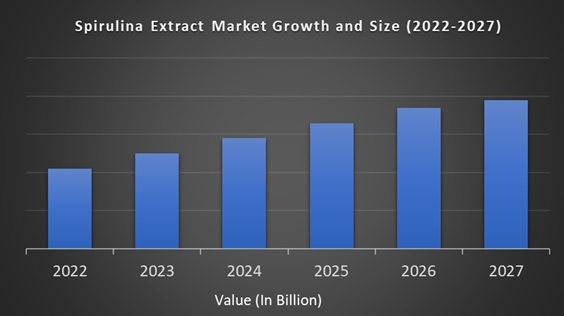 Spirulina is a drum-dried cyanobacterium (blue-green algae) consumed by humans which are made primarily from two species of cyanobacteria: Arthrospira platensis and Arthrospira maxima. Spirulina has very high protein content, considerably low in calories and cholesterol, and high in enzymes, minerals (sodium, iron, calcium, and magnesium), and phenolic acids, that have antioxidant properties. Spirulina also has very high levels of beta-carotene, a natural antioxidant, which the body converts to vitamin A and plays a protective role in the human body. Performance and stamina levels are elevated when Spirulina is taken as a sports supplement. In the past two and a half-decade Spirulina few nutrition specialists have recommended Spirulina nutrition against difficult diseases like liver disorders, allergic reactions, oral cancer and many more. This claim is also corroborated by both National Aeronautics and Space Administration (NASA) and the European Space Agency (ESA) which are analysing Spirulina as one of the key foods for long-term space missions or in case of colonization of other planets. Studies have shown that spirulina can lower cholesterol levels, stimulate the immune system and be effective in the treatment of heart disease, premenstrual stress, obesity, arthritis, anaemia and osteoporosis. Spirulina powder has great use in the dairy industry to substitute synthetic additives viz., colours, stabilizers and emulsifiers etc., employed in various dairy products.

Spirulina is easily digestible high protein product with high levels of β-carotene, vitamin B12, iron and trace minerals and the rare vital fatty acid γ-linoleic acid (GLA). Additionally, it has no religious issues or negative cultural regarding its consumption. Its production is eco-friendly, very efficient in terms of land occupation, water use and energy consumption in contrast to traditional terrestrial crops. Its production is particularly suitable to saline and alkaline conditions which are often unfavourable to traditional crops and are often occupied by disadvantaged people vulnerable to natural disasters. Its manufacture can be done at a number of different levels, from household “pot culture” to intensive commercial development over large areas. It can be integrated with rural organic waste treatment processes to improve both energy transfer efficiencies and environmental conditions. These advantages are the primary factors driving the growth of this market. Moreover, rising consumer awareness for natural food in contrast to synthetic food conjoined with health-promoting properties of natural food colours as well as the growing demand for clean label products and savoury government regulations like FDA’s approval to use spirulina to impart blue colour in candy in U.S. as an alternative to synthetic FD&C Blue#1 are the secondary factors fuelling the growth of this market.

The most commonly reported negative effects are muscle pain, flushing of the face, headache, sweating, and difficulty concentrating. People who have the metabolic disorder phenylketonuria should avoid this product. It is not recommended for people who are allergic to seaweed or seafood. Very little is known about its effects during pregnancy and breast feeding. These are the primary factors hindering the growth of this market. Blue-green algae harvested in uncontrolled culture conditions may be contaminated with heavy metals that can lead to liver damage, diarrhoea and vomiting. Furthermore, higher cost associated with the production of natural colours in comparison to the synthetic colours along with their unstable nature are the secondary factor responsible for a sluggish market growth.

This market is broadly classified into two categories – by form and by application. By form there are further two sub-segments namely – powder and liquid. In 2016, powder segment lead the market in terms of revenue share contribution and is further projected to remain dominant during the aforementioned forecast period. This is due to growing usage of powder form in products for example, bakery, confectionery and desserts. Spirulina extract is commercially being utilized for large scale manufacture of blue colour in food and beverages, in which powdered formulation suits the best in contrast to the liquid extract. Rising applications of spirulina extract as dietary supplement among consumers is further encouraging its adoption as a dietary supplement in liquid form, thus resulting in significant growth of liquid segment in the market. Moreover, liquid spirulina extract utilization in beverages is likely to increase considerably, thus resulting in extensive R&D among manufacturers. Liquid extracts are more stable and advantageous as compared to powder extract and are likely to capture more market share in the forecast period. By application, the market is segmented into Confectionery, Cosmetic, Dietary Supplements & Nutraceutical, Bio-fertilizer, and Aquaculture Feed. Dietary supplements and nutraceutical category commanded the market followed by bio-fertilizer and aquaculture feed category. Bio-fertilizer and aquaculture feed category collectively commanded 45% of the total spirulina extract market contribution in 2016.

Companies operating in the spirulina extracts Market are

What can be the size of the global Spirulina Extract market by 2028?

By 2028, it is predicted that the global Spirulina Extract market can reach a valuation of US$ xx billion.

What can be the compound annual growth rate of the global Spirulina Extract market?

The global Spirulina Extract market can expand with a CAGR of 7.1% during the forecast period.