The global Sugar Alcohols Market size was assessed to be USD 955 million in 2021, and it is predicted that to reach a value of USD 1.4 billion by 2027 at a CAGR of 2.1% during the conjecture period. The demand for sugar alcohol is expected to grow steadily in the near future. 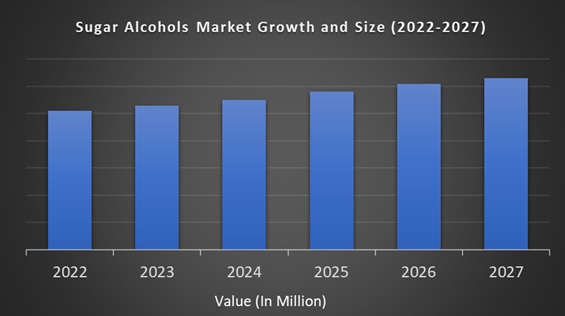 Sugar alcohols are generally organic compounds derived from sugars. Sugar alcohol is soluble and occurs naturally in small amounts in fruits and vegetables. Commercially, the sugar alcohol is derived from sugar and starch. It is a low-calorie sweetener and is added to food and drinks. Diabetes and epidemic obesity are witnessing a change in the quality of food by affecting the way consumers live around the world. The presence of foreign substances, especially artificial sweeteners, is justified by companies, but consumers choose healthier options. This trend has improved the overall call for nutritive sweeteners like sugar alcohols. Furthermore, the role of sugar alcohols in stimulating the metabolism of diabetics without using insulin has complemented their popularity in the food and beverage industry. It has less digestible carbohydrates and is recognized as a natural compound and a safe food additive.

The sugar alcohol business around the world is seeing more complexity in the supply chain, especially with regard to the storage of sugar alcohol.

Europe is also determined to have a significant market share during the conjecture period. However, Asia Pacific is likely to expand rapidly compared to other areas. With increasing health problems, population growth in developing countries is expected to lead the sugar alcohol market in the Asia Pacific locale. The increase in chronic diseases among consumers in the Asia Pacific region is expected to accelerate the sale of sugar alcohol in the near future. China and India are the main contributors to the Asia Pacific sugar alcohol market. Acquiring raw materials in countries like China and India is relatively easy, and manufacturers need to expand their production bases in the APEJ region. The region will continue to be favorable in the production and sale of sugar alcohols, mainly due to the prosperous food and beverage sector, the presence of diabetics and the large general consumer base. Europe and North America will become one of the main markets for sugar alcohol consumption.

Impact of Covid-19 on the Global Sugar Alcohols Market:

The Covid-19 pandemic has resulted in a negative impact on the global food and beverage industry, which affected the sales of sugar alcohols in the first half of 2020. However, with the increasing consumer concerns to improve healthy to combat the situation, the demand for products like sugar alcohols is touted to accelerate in the future. The rise in diabetic patients around the world is also estimated to fuel this business in the coming days.

Major key Players in the Global Sugar Alcohols Market are

What is the Sugar Alcohols Market estimated size?

The global market for Sugar alcohol is anticipated to be worth US$955 million in 2021 and is expected to expand to US$1.4 billion by 2027.

What is the segmentation in the Sugar Alcohols Market?

By Product, By End-User, By Region

What are the three major participants in the Sugar Alcohols Market?

What is the growth rate of the Sugar Alcohols Market?

The Sugar Alcohols Market is growing at a CAGR of 2.1%.

What are the restraints in the Sugar Alcohols Market?