The global Sugar Based Excipients Market size was determined at USD 860.6 million in 2021, and it is predicted to expand up to USD 1.06 billion by 2027 at a CAGR of 4.3% over the conjecture period. The growth of this market is mainly credited to the increased use of co-processed excipients. 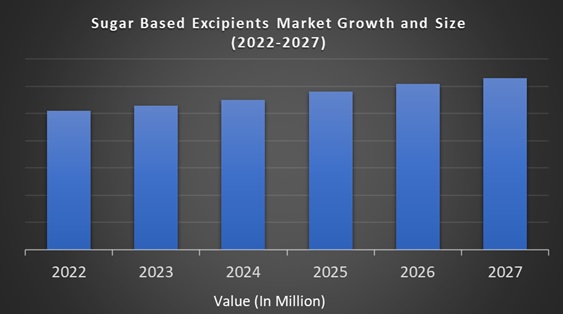 Excipients are substances that are used in medications for proper administration and are inactive ingredients that are used to support the active ingredients of medicine and provide bulky solid formulations and long stability. These products exist in different forms like gums. Starch and syrup etc. This also reduces the viscosity and improves the solubility of the entire drug. The excipients give the medicine a flavor and coat in different colors, making the medicine look different and provide texture. The excipients are unsuitable sugars and polymers, complex and even human starch and gelatin. Sugar-based excipients are the best-known type of excipients used as part of oral prescription medications. Particular attention is paid to the drugs considered for the bitter active ingredient in the trial. Sugar-based excipients are used in glycerol, sodium saccharin, sucrose, sorbitol, etc. They are primarily used for antibiotics and patient syrups.

A major factor contributing to the rapid growth of the global sugar-based excipients market is the expiry of major pharmaceutical patents.

The market for sugar-based excipients has grown significantly during the forecast period, as most medications that make oral medications are taken by special patients for children, so they like fewer medications. Depending on the form and testing of the drug, children and other patients are attractive and easy to see. Sugar-based excipients are easy to use and can be easily coated with tablets, making them suitable for most pharmaceutical industries. The ability of sugar-based excipients to be approved by regulatory authorities is acting as an impediment factor. The reach of generic drugs worldwide has become a major driver of market growth. Also, market growth has been driven by increased demand for new excipients due to the benefits of drug delivery and stability. Besides, the market is strengthening as the preference for orally disintegrating tablets increases and their development. As the elderly population and the number of pediatric patients increase, the demand for orally disintegrating tablets increases. Excipients are essential ingredients to improve general pharmaceutical activity and performance, which directly affect the properties of the pharmaceutical formulation. An adequate proportion of excipients can improve the shelf life and bioavailability of the formulation. They can also be used for drug delivery mechanisms, such as sustained-release and sustained-release drugs. Practicing mannitol in various dosage forms is the fastest-growing sugar-based excipient with different segments of sugar alcohol. The high adaptability of alcohol-based sugar excipients in new formulation technologies, such as orally disintegrating tablets, is another reason why the sugar segments will experience strong growth in the coming year.

While the market demand and need for sugar-based excipients may seem widespread, an increase in regulatory requirements leading to a lack of FDA-approved manufacturing sites is expected to hamper the growth of this market. Strict quality control procedures and price pressures faced by major players are the main challenges for this industry.

Impact of Covid-19 on the Global Sugar-based Excipients Market:

The Covid-19 pandemic effect has been felt by almost industries across the world, but the case is different for the pharmaceutical sector. There has been a huge incline in pharmaceutical production due to the increasing call for drugs and medicines to combat the coronavirus. This trend is likely to increase the growth of the sugar-based excipients market in the coming years.

Major Key Players in the Global Sugar Based Excipients Market are

What is the Sugar Based Excipients Market estimated size?

The global market for Sugar Based Excipients is anticipated to be worth US$860.6 million in 2021 and is expected to expand to US$1.06 billion by 2027.

What is the segmentation in the Sugar-Based Excipients Market?

By Product, By Type, By Functionality, By Formulation, By Region

What are the three major participants in the Sugar Based Excipients Market?

What is the growth rate of the Sugar Based Excipients Market?

The Sugar Based Excipients Market is growing at a CAGR of 4.3%.

What are the restraints in the Sugar Based Excipients Market?

While the demand for sugar-based excipients appears to be broad, the market's expansion is projected to be hampered by increased regulatory requirements and a dearth of FDA-approved production facilities. The key problems for this market are stringent quality control processes and pricing constraints experienced by big competitors.