The global Carrageenan Market size was worth USD 931.6 million in 2021, and it is considered that it will reach a valuation of USD 1.2 billion by 2027 at a CAGR of 5.6% during the conjecture time frame. 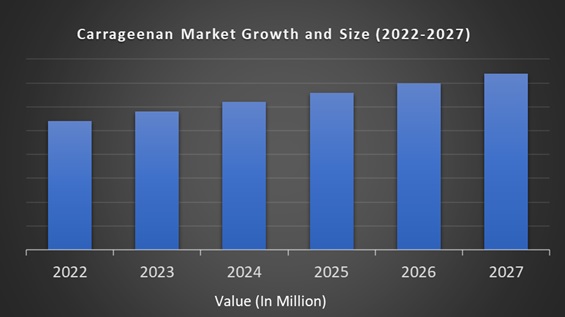 Carrageenan is an additive and natural component of red algae or Irish moss used to emulsify, concentrate and preserve food and beverages. Carrageenan is a water-soluble fiber that makes low-fat and low-fat options taste better than sugar, making certain foods more nutritious. In addition, carrageenan helps stabilize food and drinks by preventing them from separating. For example, chocolate is deposited at the bottom of chocolate milk without carrageenan. Yogurt, meat products and walnut milk are the main applications in which carrageenan are used as an ingredient. Additionally, soy milk, hemp milk, deli meats, chocolate milk, cottage cheese, non-dairy desserts, vegan cheese, coconut milk, etc., are the main sources of carrageenan in the market. Also, discontinuing infant formula, minimizing food waste by avoiding spoilage, and making yogurt and ice cream creamier are some of the benefits of carrageenan ingredients. Carrageenan is commonly found in undigested and decomposed forms. Some studies suggest that carrageenan intake may promote or trigger inflammation, swelling, food allergies, colon cancer, glucose intolerance, and irritable bowel syndrome, which can lead to diseases such as tendinitis, arthritis, and chronic cholecystitis. Carrageenan, although indigestible, is used prominently in the emulsification of food products.

Along with increased demand for organic ingredients to increase the knowledge of processed foods, increased demand for processed foods is expected to lead the global market for carrageenan during the evaluated period. In addition, the properties of carrageenan, such as texturing, thicknesses, stabilizers and gelling agents, are expected to increase the growth of the carrageenan market in the future. A significant amount of carrageenan is used in nutritional supplements, processed meats, toothpastes, dairy products, skin preparations, laxatives, and pesticides to further develop the global market during the estimated time. Another important factor in the growth of the market is the many functional and health benefits of carrageenan-based products. It acts as a stabilizing, thick and texturizing and gelling agent. The carrageenan market is multiplying with the rise in its application as a raw material in the production of bakery products, water-based foods, meat and pet foods.

Carrageenan is also used in the production of dairy products as an emulsifier. In addition, carrageenan is also used in meat and poultry, and in bakery and confectionery products. Mono and diglycerides of carrageenan, lecithin and fatty acids are considered the best alternatives to artificial additives derived from natural sources such as sunflower, palm or soybean oil. So, the surge in the demand for natural food additives will support the development of the market during the projection period. Additionally, many food and beverage manufacturers prepare vegan products using carrageenan instead of gelatin in the dessert production process. One of the prominent aspects boosting the global carrageenan market is the augmented call for processed foods. As awareness of ingredients in processed foods increases, so does the demand for organic ingredients. Another very important factor for the growth of the carrageenan market is the multi-functionality of the product. It is thicker and acts as a stabilizing, texturizing and gelling agent. This replaces many other products used in processed foods.

The global carrageenan market is classified by region into Asia Pacific (APEJ), Middle East and Africa (MEA), and Japan, excluding North America, Latin America, Western Europe, Eastern Europe, and Japan. Asia Pacific is expected to occupy most of the industry as the number of applications increases. The European Union and Latin America are also among the prominent producers of carrageenan across the world. Of these regions, Europe is estimated to remain dominant during the outlook period, in terms of value and volume. The growth of the carrageenan market in European countries is supposed to be driven by several factors. One of the prominent elements supplementing the growth of this market is the intake of processed foods by European consumers. The changes in consumer lifestyle have pushed them towards processed foods, accelerating the carrageenan market growth over the determined period. Of the countries in Europe, Germany and the United Kingdom, in 2019, a total of 45% of the market share in the regional carrageenan market, but Asia Pacific is foreseen to expand at the most substantial growth over the prognosis period. The making of carrageenan is exceptionally high in the southeastern nations of the APAC. The Philippines has a significant market share in the region in terms of production. The United States is one of the main exporters of carrageenan, with the world average that drives the North American market. Carrageenan markets in the Middle East and Africa and Latin America are likely to experience a significant increase in carrageenan consumption as food intake and low-fat food intake increase to avoid sugar-related problems.

Major Key Players in the Global Carrageenan Market are

What is Carrageenan? Mention some of its uses?

Carrageenan is an additive and natural component of red algae or Irish moss used to emulsify, concentrate, and preserve food and beverages.

Mention the Key Players in the Carrageenan Market?

Mention some of the recent developments in the Carrageenan Industry?

Mention the Segmentation analysis of the Carrageenan Market based on seaweed source?

The Segmentation analysis of the Carrageenan Market based on seaweed source is as follows: