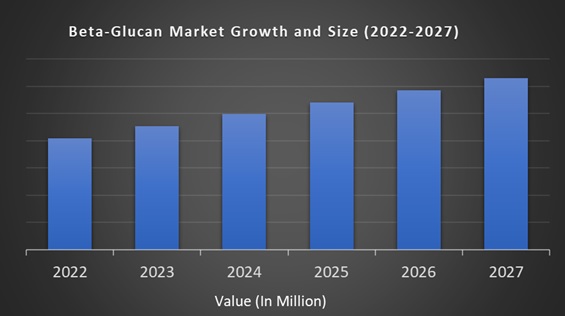 In nature, beta-glucan can be found in the cell walls of cereal grains, baker yeast, mushrooms, and other organisms. This is a natural substance obtained from plants that has been scientifically demonstrated to benefit human and animal health in a variety of ways, including maintaining the immune system, lowering blood sugar levels in the human body, and more. Beta-beneficial glucan's offerings are specifically designed to meet the changing nutritional diets and requirements of global consumers, and it has developed a strong association with a variety of applications in the global market place, including dietary supplements, functional food, personal care, and others.

The global beta-glucan market is primarily driven by consumers' rising preference for plant-derived foods and food ingredients that can meet nutrient needs and improve nutrient consumption in their daily diet.

In the next six years, the global beta-glucan market is expected to be driven and fueled by the growing global population, increased awareness of the importance of nutrition, and breakthrough extraction methods.

The rapid rise of the nutraceutical sector around the world boosted the global beta-glucan market.

Consumers are incorporating functional foods and other dietary supplements into their normal diet in novel ways to meet their nutritional needs. The demand for such nutrient-added food products is fast increasing among consumers who are following a healthy diet, such as athletes, gym-goers, and other health-conscious people. Manufacturers of nutraceuticals are focusing on providing and formulating a wide range of natural supplements infused with beta glucan advantages, primarily to boost the gastrointestinal and immune health of the body. For the past several years, the increased use of beta glucan in the manufacturing process has been attributed to the growing popularity of the go-green trend and plant-derived food components around the world. Beta glucan's future expansion in the global marketplace is assured by the anticipated of the upcoming environment and rising need for such nutrient-infused supplements.

Because of its positive health benefits, beta-glucan is becoming increasingly popular around the world, resulting in an extension of its end-user range, which includes pharmaceuticals, cosmetics, and other products. To address the increased demand among end-users, manufacturers must introduce more and more diverse beta glucan. Oat is one of the most widely used sources of beta glucan in the world. In recent years, oat production has increased around the world, and its ample availability is one of the major causes motivating manufacturers to increase overall beta glucan output in the worldwide market.

Manufacturers are also revamping products to lower cholesterol, sugar, fats (both trans-fat and saturated), and sodium. They're moving away from artificial additives and toward goods that are high in protein, fibre, and other functional elements. These advances have also resulted in an increase in per capita expenditure in major North American and European countries, indicating that consumers are spending more on health and wellness than in previous years. Therefore, it is further estimated to increase the global beta-glucan market growth in the next six years.

The beta-glucan market is regulated by a variety of regulatory organizations that vary by area. Distinct countries have different laws addressing extraction, processing, formulation, and end-product manufacture. The use of beta-glucan in pharmaceuticals, as well as food and beverages, is hampered by the fact that health claims vary by country. End-product manufacturer claims and labelling standards are likewise governed and monitored by the rules. Despite the fact that Europe is the principal market for beta-glucan products, health claim regulations were standardized in late 2007 under art.13 and art.14 – Regulation of January 19th, 2007. Only beta-glucan isolated from oats is suitable for health-related claims, as oats are one of the key sources of greater beta-glucan content than yeast and barley. Therefore, these factors further acts as the major restraints in the global beta glucan market during the forecast period.

The global beta-glucan market is expected to be dominated by the grains and cereals segment. Beta-glucan, a glucose polymer found in the cell walls of cereals such as oats and barley, is one form of fibre that has recently gained attention. Cereal beta-glucans are dietary fibres found largely in oats and barley that are thought to provide a number of health benefits. Lowering the postprandial glucose response and improving blood cholesterol levels are two examples.

In the global beta-glucan market, the soluble sector is expected to increase at a faster rate. Fruit, vegetables, oats, barley, and pulses like beans, lentils, and peas all contain soluble beta-glucan in large amounts. It is a nutritious substance that is used for its benefits in improving a person's intestinal health. In the colon, it creates a gel that aids in the digestion and absorption of carbohydrates, particularly glucose. Beta-glucan also helps to maintain blood sugar levels, preventing decreases at regular intervals that can be life-threatening in the elderly. Oats, which are a big carrier of healthy cholesterol, include soluble beta-glucan fibre, which inhibits oils from being reabsorbed into the bloodstream, which further decreases the chance of liver and heart diseases.

The Global Beta-Glucan Market Report includes the segmentation of Regions:

As the world's most mature and competitive industry, it has long reaped the benefits of several unpriced environmental and social externalities. In recent years, there has been a shift toward include environmental impacts into the genuine cost of food. However, the pandemic is highlighting the importance of societal forces. With stakeholders and the supply chain (including customers and regulators) demanding change, food and beverage firms' long-term sustainability and financial performance will be determined, at least in part, by their ability to manage these expectations and address these challenges.

Major Key Players in the Global Beta-Glucan Market are

What can be the size of the global Beta-Glucan Market by 2027?

By 2027, it is predicted that the global Beta-Glucan market can reach a valuation of US$ 630.5 million.

What can be the compound annual growth rate of the global Beta-Glucan market?

The Global Beta-Glucan market can expand with a CAGR of 7.8% during the forecast period.

Mention the major Key Players in the Global Beta-Glucan Market?