The global organic acids market Size was estimated to be USD19.5 billion in 2021 and is estimated to reach around USD 31.5 billion by 2027, registering a growth rate of around 8% from 2022 to 2027. The overall market is expanding with the rising use of organic acids in different applications like food and beverages, personal care, and pharmaceutical sectors. 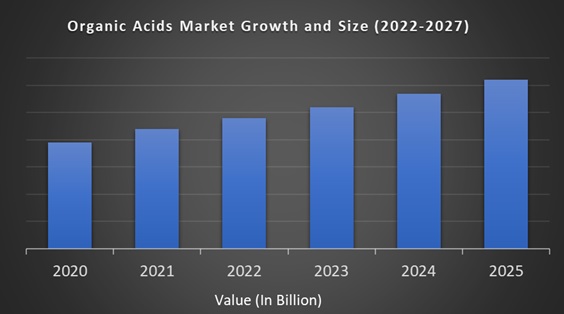 Organic compounds that have acidity are known as organic acids. Commonly known organic acids are associated with carboxyl -COOH groups whose acidity is inhibited by them. Sulfonic acids, that is, acids with -SO2OH groups, are relatively strong acids. Also, alcohols that have -OH groups can act as acids, but they are relatively weak acids. Its relative stability determines the acidity of the conjugate base of an acid. Uric acid, acetic acid, citric acid, and lactic acid are commonly available organic acids. They are used in various commercial applications, such as colorants, surfactant catalysts, and others. Formaldehyde can be used as an antibacterial agent, but glycerin is used as an energy source in the production of organic acid. Very few organic acids are obtained from the fermentation process of numerous microorganisms and are widely used in the food and beverage industry. Sulfuric acid, proteins, amino acids, acid salts, oils, enzymes, and other raw materials are used in the production of organic acids. Some of the prominent end-user industries in this business are pharmaceutical, food and beverage, textile and adhesive, petrochemical and others.

The growing demand for prepared foods and technological innovation and the creation of organic acid from valuable renewable sources are other factors driving the growth of the market.

Changes in raw material prices are presumed to hamper the growth of the global organic acid market. The production of synthetic organic acids from non-renewable sources (simultaneous fermentation and product recovery) creates a dangerous environment and creates strict regulations on use, limiting market growth.

Major Key Players in the Global Organic Acids Market are