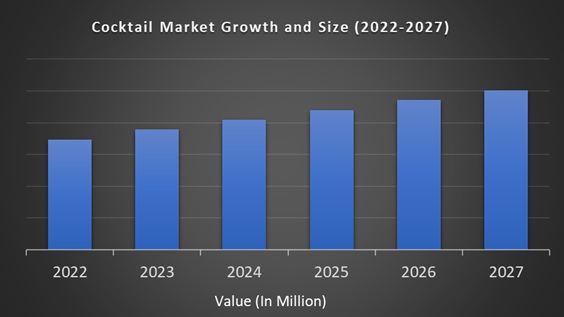 Cocktail refers to an alcoholic beverage that comprises of gin, brandy, vodka, whiskey, tequila, or rum that is combined products like fruit crush, cream, honey, milk, sugar, herbs, or other flavorings. The cocktail market has seen a steady increase among consumers in recent years, because the product can be seen as a form of alcohol consumption. Cocktails increased due to the increase in drinking beverages. Since then, the cocktail market has seen many innovations and varieties of products to meet the needs of consumers.

Increase in cocktail consumption is due to rise in income and alter in lifestyle drives the expansion of the market. Besides, availability of vegetable & botanical cocktails is likely to act as a catalyst in the growth of global cocktail business.

Rising demand for cocktails drinks can be credited to the improving lifestyle of people, increasing per capita incomes in developing countries. Also, holiday seasons provide an even more boosted demand for cocktails further contributing to the growth of the market. The cocktail market has increased significantly in the last decade, but the growth of the cocktail industry has been very slow in the last five years. Also, introduction of new products such as frozen cocktails, canned cocktails has made it easier for people to enjoy them at home and have also made them cheaper and more available to consumers of all classes. The global cocktail market has been growing immensely due to many factors such as the increasing per capita income in developing countries and the easy availability of botanical and vegetable cocktails. Cocktails refer to drinks which involve mixing of two beverages, one of them being alcohol based. The cocktail market is largely driven by the weather and seasonal holidays of consumers, such as those who enjoy picnics and parties. The global cocktail market has seen significant gains over the past decade, but market growth has been very slow for the past five years. The main driving force of the cocktail is the pleasant and convenient use that can be used directly without the effort of mixing the ingredients of the cocktail. This product also offers the benefits of using it while traveling. The cocktail market has opportunities to expand in hot regions like the dry tropics, and by building more distribution channels, sales can increase. The global cocktail market has stagnated due to limited product innovation. This product is less popular with people over 40 and the younger generation is a major contributor to the growth of the cocktail market.

Despite the growing demand for cocktails, Alcohol is medically proven to be harmful to health causing depression, alcoholism, liver problems etc. With improvement in people's lifestyles also comes people becoming more self-aware about their health and giving up alcohol. Additionally, cocktails come with a high amount of sugar usually, further pushing away the health conscious. Moreover, the demand of cocktails is usually limited to the youth and is very less from consumers over the age of forty.  Thus, even though the market is growing, the growth rate hasn’t grown much through the years.

Impact of COVID-19 on Cocktail Market

The COVID-19 pandemic has affected nearly every market in the world due to travel restrictions, store closings, and permanent small business closures. The main demand for cocktails was based on the catering and bar businesses, which consisted mainly of small businesses. Unfortunately, due to the imposition of foreclosures in many countries, small businesses have closed their doors to cut losses. Moreover, people across many countries have become more conscious about their dietary intake and have decided to opt for a healthy lifestyle to the ill-impact of alcohol and high sugar levels. This has led to a decreased consumption of alcohol-based products, especially in the Asia Pacific region.  Since supermarkets and convenience stores was also a major contributor to the cocktails market, this factor also leads to a major blow in the demand for Cocktails.

By Type, Cocktail market is divided into Long Drink and Short Drink. Long drink type cocktails are the major shareholder of the market and this trend is expected to continue in the future.

By application, the cocktail industry is divided into Backyard BBQ, Wedding Ceremonies, Cocktail Party and Others.

By distribution, the cocktail market is divided into Bars and Restaurants, Supermarkets and Hypermarkets, Convenience Stores and Online Retail. Currently, bars and restaurants are the major shareholders, but convenience stores and supermarkets are catching up as well.

Major Key Players in the Global Cocktail Market are

What is the growth rate of the Global Cocktail Market?

What is the study period of this market?

Bacardi, Jack Daniels & Absolut Company are some of the key market players.

What are the key drivers of the cocktail market in the world?

The improving lifestyle of people across the world and the increasing per capita income of people which push people into a life of revelry are the major drivers of the cocktail market.

North American region stands out as the region with the highest demand for cocktails.