The global Fast Food Market size was calculated to be USD 647.7 billion in 2021, and it is envisioned to reach USD 931.7 billion by the end of 2027 at a CAGR of 4.6% over the prediction period. The variety of foods available in each sector is primarily driving this market growth. 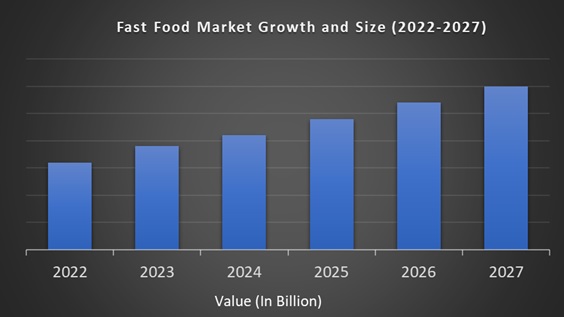 Fast food is defined as the food that is prepared and served at quick-service restaurants or street vendors. It acts as an alternative to homemade food. Fast food is extensively used in end-user industries like restaurants, hotels, and fast food centers. They are predominantly prepared in large quantities and are quickly served to customers based on their needs. There are a variety of fast foods, including burgers/sandwiches, pizza/pasta, chicken and seafood, and Asian/Latin American food.

The global fast food market has resisted growth due to the rise in the consumer foodservice sector, even during the recession.

The rise in disposable income and the call for convenient and affordable food led to the development of this market. Most of the fast foods available today are healthy and help you lose weight with the right mix and proportions of other foods. The urge for fast food has risen in the last few years due to new product launches in the food industry. The overall increment in the number of quick-service restaurants, hotels, and so on, is also touted to fuel demand in this market. Faster food product sales declined as consumer awareness of healthy food options increased. As customers prefer different products, the global fast food industry will develop with lucrative opportunities. The market also allows small players to take advantage of the global market share of fast food by satisfying the tastes of local consumers and maintaining competitive prices. The world employment rate for women has increased significantly. As the number of women hired increases, it becomes quite difficult to cook, leading to fast food. As a result, market participants have included healthier fast food options that contain hormone-free meat, natural vegetables, hormone-free meat, and organic ingredients throughout the store. This will open up new opportunities for market growth during the forecast period.

Increased health awareness among users may hinder the development of the fast food market for now. The growth of the global fast food market has been limited due to the presence of unsaturated fats in fast food products and the resulting health problems with food safety regulations. As food safety and animal welfare regulations increase, it is supposed to act as a major limiting factor in this market. Furthermore, knowledge of consumer health, especially obesity, is estimated to be another constraint to market growth.

The global fast food market is divided into North America, Europe, Asia Pacific, and other countries (RoW) by region. Europe, followed by North America, had the largest share of the entire market and is expected to maintain its market position due to the majority of its workforce during the forecast period. The rapid expansion of the fast food chain in North America will help the growth of the future fast food market. North America and Europe had a notable market share in the past because of their high dependence on convenience due to their busy lifestyles and high demand for food in restaurants. In addition, healthy changes to the fast food menu and the introduction of raw cheese, organic vegetables, hormone-free meat, and natural ingredients contributed to the maturity of this market. These major changes have proven to be important for growth, fueled by changes in consumer preferences for fast food and the transparency of fast food chain operations.

The Asia-Pacific region is foreseen to experience high growth in the fast food market during the outlook period. This is mainly due to an increase in urbanization, rise in disposable income and demand for the western lifestyle. India and China are considered attractive markets for fast food because they prefer fast food over traditional restaurant food. Favorable demographics, increased disposable income and purchasing power, increased urbanization, and rapid adoption of Western lifestyles have vastly improved the future of the developing world market. With a preference for the proposal, proximity and easy price, developing countries have proposed changes in the global market. Significant growth in fast food chains in Brazil and the rest of Latin America is presumed to strengthen the growth of the fast food market during the outlook period. Furthermore, Latin American food opened the market with bold favors. The Middle East and Africa are estimated to show sustainable growth with better living standards and discretionary incomes.

Major Key Players in the Global Fast Food Market are

What can be the size of the global Fast Food Market by 2027?

By 2027, it is predicted that the global Fast Food market can reach a valuation of US$ 931.7 billion.

What can be the compound annual growth rate of the global Fast Food market?

The Global Fast Food market can expand with a CAGR of 4.6% during the forecast period.