The Global Dairy Whitener Market size is valued at US$ 10 Billion in 2021 and is anticipated to increase at US$ 17 Billion by 2027, with a growing CAGR 6% of in the next six years. 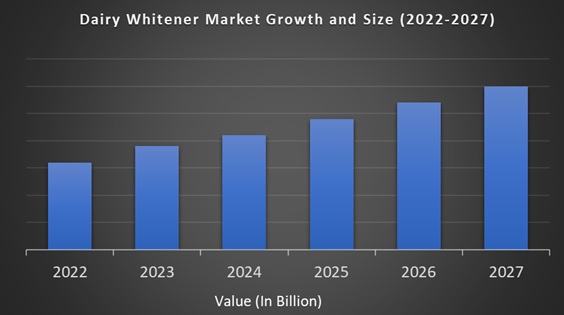 Dairy whitener, also termed as milk powder, is extensively employed as a substitute to milk in beverages like tea and coffee. They are also used in other foods such as hot chocolate, puddings, soups, and sauces. In addition to whitening, dairy bleaching agents improve the overall flavor by adding mouthfeel, body, and flavor to added beverages. They are available in liquid, powder or condensed form and can vary greatly in fat and sugar content. Dairy bleach is manufactured using a spray drying method in cow/buffalo milk or a mixture of different milks from multiple sources. The liquid is removed from the milk and can be easily used in the preparation of tea or coffee by adding sugar or sweeteners. They are available in powder or liquid form.

The global dairy whitening market is expected to be driven by increased consumption of tea and coffee across the globe.

The global dairy whitening market is expected to grow at an impressive growth rate during the conjecture period as tea and coffee consumption increases worldwide. Compared to fresh milk, additional features like portability are accelerating the expansion of the dairy whitening industry around the world. The increased preference for other low-dairy beverage alternatives will have a major impact on the dairy whitening market, leading to slow consumption in the USA and Europe. Along with the 'lactose intolerance' factor, an increase in public health awareness leads to a decrease in consumption levels as the market share of other beverages such as coffee and bottled water increases. However, dairy whitening manufacturers can reverse the decline curve in Western countries with new product innovations, including organic and specialty transformations. Population growth, growth in disposable income, urbanization rates, ease of use and storage, poor lifestyles, and changes in eating habits are some of the factors that expand the growth of the market. The market is primarily driven by increased consumption of dairy ingredients with superior bleaching ingredients, with additional sugars that are readily available for tea or coffee. In addition to whitening, dairy bleaching agents enhance the overall flavor of the product by adding flavor and aroma to the added beverage. The growing demand for fast food is due to the busy agenda of consumers. This contains various processed and packaged foods that have an extended shelf life and easy usage. Therefore, consumer preferences for these foods are more geared towards dairy bleaching agents than normal milk.

Additionally, dairy bleach offers a number of advantages over regular milk, such as convenience, portability, and long shelf life, as the number of workers seeking a convenient and healthy alternative increases, strengthening the global dairy whitening market. Increment in shelf life, easy handling, and the ready-to-use form are the crucial aspects of driving their consumption. Furthermore, as the demand for improved milk protein and fat content increases, it is expected to provide innovation opportunities for dairy whitening manufacturers and develop new product technologies. Manufacturers are investigating 'ultrafiltration' techniques that use buffalo milk to produce medium-fat, protein-rich dairy bleaching agents for rich, sensational quality. The infant formula industry is anticipated to offer a huge opportunity for the global dairy whitening market growth. Because of its application in the infant formula, the increased sales of infant formula directly impact the need for dairy whitener agents over the calculated period. Factors such as a rise in the population birth rate and a decline in overall mortality are resulting in an increase in the child population, are expected to drive the global dairy whitening market.

With increased health awareness, consumers who prefer dairy whitening agents over milk and conventional dairy products can hinder the growth of the dairy whitening market. Furthermore, the lack of product awareness and the presence of counterfeit products in developing countries in Asia Pacific, the Middle East and Africa have hampered the growth of the global market.

Major Key Players in the Global Dairy Whitener Market are

What will be the pace of growth for the dairy whitener sector between 2021 and 2027?

What are the major market trends for dairy whiteners?

Who are the major dairy whitener manufacturers?

Which type of dairy whitener is predicted to have the most market share?

The unflavored dairy whitener type is predicted to have the biggest sales share, with over 50% of the market.

What is the value of the dairy whitener industry?

The market for dairy whitener is expected to reach approximately $10 billion by 2022.